The volcano of Nisyros is the newest active volcano in Greece since its oldest rocks do not exceed 150,000 years of age. 60,000 years ago to this day, hundreds of small eruptions built a cone that rose about 600 metres above sea level and had roughly the perimeter of the island as it is today.

Two huge explosions, 25,000 and 15,000 years ago, destroy the central part of the volcano, which caves in and creates the current caldera of the volcano. Since then the volcano remains at rest. But the hot rocks, located a few kilometres in depth underneath the caldera and their hot gases, warm the seawater and the rainwater that circulates around the more shallow rocks and convert it into superheated liquid at temperatures approaching the 500 degrees Celsius. Intermittently, the superheated liquid ejects into the air the rocks that prevent it from reaching the surface, causing hydrothermal explosions and creating hydrothermal craters. Such explosions were recorded in Nisyros in historical times. 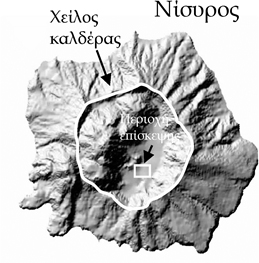 The center of the island is dominated by the caldera of Nisyros. Its diameter is about 4 kilometers, its ledge ranges in altitude between 250 and 600 meters, while its bottom is at 100 meters from the sea level. Its west-northwestern part is surrounded by the hills Mporiatikos, Nifios, Profitis Elias and Trapezina. Traces of 20 craters have been detected inside the caldera, 10 of which are well preserved and each one has its own name. The settlements of Emporios and Nikia offer a magnificent view of the caldera, and the view from Prophitis Elias in Nikia in particular will astonish you.

HYDROTHERMAL EXPLOSION: The seawater and rainwater descend onto the rocks of the island, gather in deep water tables and are heated from the magma. The temperatures reach 400 to 500 degrees Celsius and so the water turns to steam. The vapor exerts tremendous pressure on the rocks that prevent him from reaching the surface and when it manages to overcome the weight of these rocks, it ejects them in the air, causing a hydrothermal explosion.

Stefanos is the largest and most impressive of the 10 craters and monopolizes the interest of visitors, as it seems to them that this is the "volcano". It is one of the largest and best-preserved hydrothermal craters in the world, it has ellipsoid shape with its longer axis at 330 meters and the smaller at 260 meters, while its depth reaches 27 meters. We don't know its exact age, like with most craters, but it is calculated that it can’t be more than 3,000 to 4,000 years old. Every visitor can follow a trail to reach the inside of the crater and admire the space and its unique steam activity up-close. 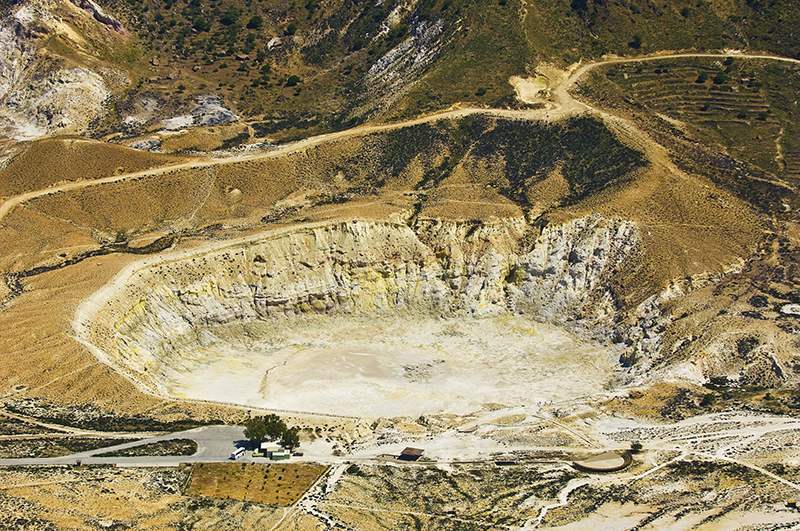 STEAM ACTIVITY ON CRATER STEFANOS: When the rainwater enters the inside of the crater, a few meters below its surface, it encounters temperatures above 100 degrees Celsius and starts to heat and turn into steam. The steam pressures the surface of the crater, causing small explosions and creating round funnels, the holes that exist in the crater. Along with the steam, other gases come out, such as hydrogen sulfide which produces the distinctive smell that prevails in the area. 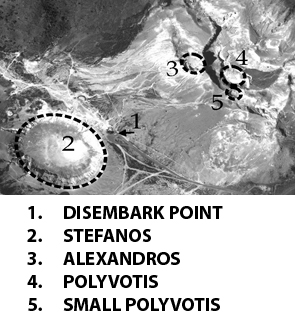 Next to Stefanos lies a smaller crater, the small Stefanos.
The two older distinguishable hydrothermal craters are the kaminakia, beneath Nikia. Each of them has a diameter of 150 meters.
The rest hydrothermal craters are situated in the area of Lofos, across from the crater Stefanos. There you can find Logothetis, the oldest crater in the region, Polyvotis with a diameter of 300 on 150 meters, small Polyvotis, the outcome of the latest hydrothermal explosion in 1887, Alexander, Achilleas and Logothetis.

There is an entrance fee if you wish to visit the area of the craters.