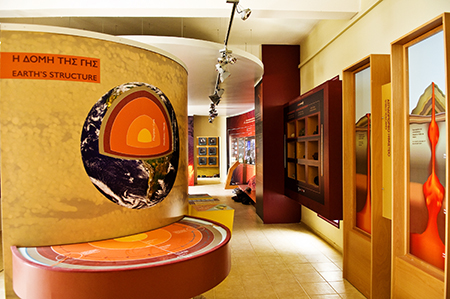 Located in the village of Nikia, it is the first and so far the only volcanological museum in Greece.  The main areas of the Museum host the following thematic units: -Volcanic genesis and structure -Volcanic process and products –The volcanoes of Greece –The volcano of Nisyros and the other active volcanoes of Greece and Volcanoes-Environment-Human. The museum has an exhibition area, which includes all the rocks of Nisyros as well as rocks from other volcanoes and also, places to view informative material.

The museum is located in the centre of the village of Mandraki. Its exhibition is divided into sections that cover the whole history of the island, from the prehistoric to the post-Byzantine period.

The Folklore Museum of Nisyros is housed in a two-story 18th century mansion that has been restored by the municipality, on the steps to the Monastery of Panagia Spiliani in Mandraki. The rooms of the museum are shaped in such a way as to include all the rooms of a traditional Nisyrian house, like the oven, bakery and the bedroom (the so-called "moni"). The museum exhibits a variety of mostly utilitarian folk art objects which are not used today. Plows, sickles, basins, querns are some of the everyday objects used by the island’s inhabitants. There is also a large collection of embroideries, hand-woven textiles, assorted documents and photographs of the locals that played an important role in the history of the island. The bedroom, the so-called "moni", is of particular interest. It was the place the whole family retired to in order to rest and included two repositories, the cellar and the glavani (hatch), where the Nisyrians used to store clothes, bed sheets and other miscellaneous items.

It presents exhibits from the Holy Monastery of Panagia Spiliani and the parish of Panagia Potamitissa of Mandraki. The exhibits include sacred religious relics, vestments from sacred temples, Holy Gospels, Holy Vessels, Sacred Images and gifts-objects of value as pledge (taximo) to the Monastery. In all museums there is a ticket fee.