The Land of Nisyros

Nisyros, unlike other volcanic islands, has abundant vegetation. The rich volcanic soil holds enough moisture, which makes the land particularly fertile and ideal for tree cultivation. The land of Nisyros is systematically farmed for millennia. The inhabitants took advantage of the fertility of the soil and made good use of its every inch. 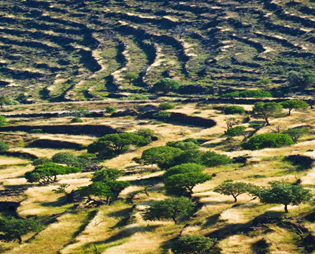 The terrain of Nisyros is not level, but has a considerable inclination which made the farming of the land quite difficult. The solution came from terraces or drystone walls (or “vastadia” for the local population). Those terraces built of stone turned the inclining soil to step after step of farming land (which the inhabitants call “tavles”). It is estimated that nearly 15 - 20 km² were cultivated in this way, which means half the island.

On those terraces, one could come across some buildings called “spiladia”. They are stone buildings with one or two rooms serving different needs. They were first of all temporary lodgings next to the fields, so that the farmer won’t need to go back and forth from the field to his house. At the same time, they were storage space for the tools and harvest, and also places to distil the raki, make cheese or do any other agricultural work. Most trees of Nisyros are olive, lemon, agramithia, fig, almond and oak trees. It is notable that the Turks used to call the island “incirlik” which means “fig island”. The largest production that Nisyros had was in almonds. The production quantities not only covered the needs of the island but they were also an exportable product. 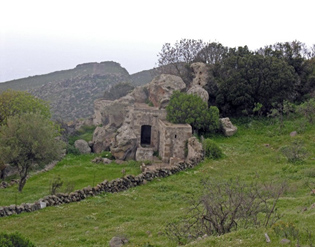 The ample almonds were used to make dishes like a garlic dip called “skordalia” and also a local drink, “soumada”. Everything else was growing beneath the trees and first and foremost, barley instead of wheat. Next to the cereals, all the legumes were grown, even chickpeas which are the basis for several special dishes such as the "pithia", a kind of meatball made of chickpeas. Today, the gradual abandonment of agriculture by the shifting of a large part of the population to tourism, has hurt the rest of the crops, but the trees still dominate the landscape of Nisyros, since they continue to produce fruit with fewer requirements.