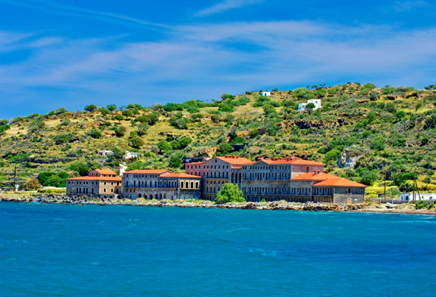 Three are the most famous hot springs in Nisyros, the Loutra, 1,500 meters north of Mandraki, the Thermiani in Paloi and the Avlaki in Nikia.

The waters of the hot spring in Loutra exploit the Municipal Hot Spring of Mandraki since 1872. They are legendary for their therapeutic properties in rheumatism, arthritis, skin diseases and diseases of the circulatory system. The maximum temperature of the hot spring is 46 degrees.

The spring of Thermiani is well-known since ancient times. The inscription found on the ruins of the Roman baths which operated in the same area reinforces the view that the father of medicine Hippocrates, had picked out this spring of Nisyros as a thermal spring therapeutic centre. The period from 1895 until the early 1930s was the last period during which a healing centre in this region was operational, and it is the famous “Pantelidis Baths”. The old baths have been restored these days, but they do not work. The hot spring temperature is 33 degrees.

Another well-known hot spring is the one in the cove of Avlaki. Its waters were used for thermal treatments before the settlement was abandoned. The warm water gushes into the sea even to this day and its maximum temperature reaches 59 degrees.