The Creation of Nisyros 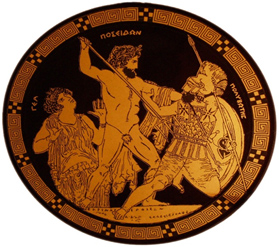 According to mythology, Nisyros was created when during the Gigantomachy, Poseidon arrived in Kos pursuing the giant Polyvotis. In an effort to exterminate him, he cut off a piece of Kos and threw it at Polyvotis. That piece crushed the giant and is considered to be Nisyros. The periodic vibrations due to the volcanic action of the island are attributed to the roars of the giant Polyvotis, who is trying to be freed from the weight of the rock that lays on him for centuries.

Although we do not know when the molten rock started to flow in the vicinity of Nisyros for the first time or when the underwater foundations of the island began to be built, the above legend tells us that our ancestors knew that Nisyros is a volcano and that its rocks are similar to those of southwestern Kos. They knew that the frequent local earthquakes accompanied by cracks and noise which tormented the island since those years, are interwoven with the genesis mechanism of the island.

The volcano of Nisyros emerges from the sea and begins to build an onshore cone around 150,000 years ago. In the subsequent 100,000 years, the violent explosive and mild volcanic action, which succeed one another, build by a succession of layers of ash, lava currents and domes, a volcanic cone above sea level, with a diameter of about seven (7) kilometers and a maximum altitude of 600 meters.

The first series of large explosions manifested about 40,000 years ago. The trapped magma gases hurl in the air the molten rock producing tens of millions of tons of pumice and ash.

The first major catastrophic eruption manifested on the island around 25,000 years ago. Within a few days, 8 billion tons of molten rock eject into the atmosphere producing over 20 billion cubic meters of pumice and ash. The top of the volcano collapses into the vacuum that has been created beneath the island due to the launch of magma, thus creating the first caldera of Nisyros. After the blast, thick molten rock creates large lava domes near the east walls of the first caldera and covers the southeastern slopes of the volcano with very thick lava currents, on top of which the village of Nikia is built today. 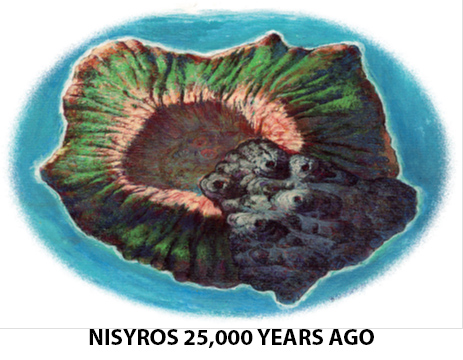 The period of calm that followed was interrupted by the second devastating explosion of Nisyros, approximately 15,000 years ago, which adds new layers of pumice on the island and creates the current caldera of Nisyros. That is when Nisyros takes its present form.

None of the subsequent eruptions of the volcano recorded in historical sources produce molten rock. All of them are hydrothermal explosions due to the existence of superheated steam in the subsoil of the island. Seawater and rainwater descend on the rocks of the island, gather in deep horizons and get heated by magma. The water there is converted to superheated steam and exerts tremendous pressure. When this pressure overcomes the weight and consistency of the above rocks, the steam hurls them through the air causing a hydrothermal explosion. Such were the explosions that were recorded in Nisyros in historical times.